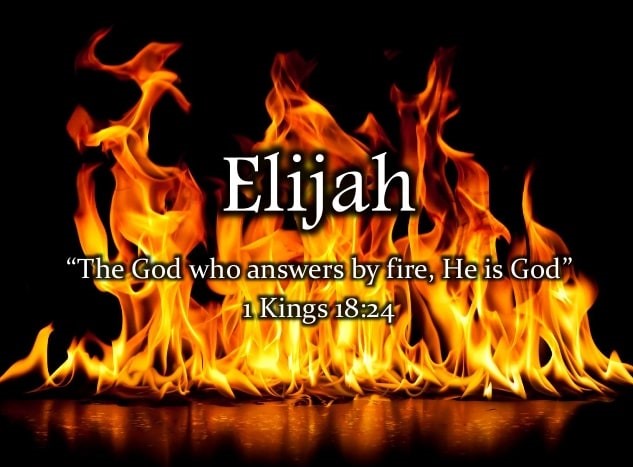 After the death of Solomon, the kingdom is divided for about 300 years. A particularly evil king in the north was Ahab and his wife Jezebel. During this time Israel was not even pretending to worship Yahweh but rather a foreign god Baal.

Into this situation God sends a spokesperson – a prophet – called Elijah (my God is Yahweh). Elijah calls Israel to repent during its darkest days. Elijah’s message is primarily one of judgment – he predicts 3 ½ years in which it would not rain causing famine and the defeat of Israel by foreign armies. Both are covenant curses for disobeying the law of Moses. When the king’s captains come to arrest him, Elijah calls for fire to fall from heaven to consume them.

In 1 Kings 18 there is a great contest between Elijah, the sole prophet of the LORD, and the 450 false prophets of Baal. After hours of whipping themselves into a frenzy through the heat of the day, Baal, the supposed lightning god fails to cause fire to fall from heaven to consume the sacrifice. Elijah mocks Ball suggesting that he might be on a holiday, partially death or going to the toilet. Then in the cool of the evening, Elijah pours water over his sacrifice and the stones before uttering a short prayer in response to which the LORD sends fire from heaven consuming not only the sacrifice but also the stones.

Despite the killing and burying of the false prophets at the northern pass into the land of Israel (a warning to those who might in the future seek to bring Baal worship into Israel) and the lifting of the covenant curse by God sending rain – Israel does not repent.

When Elijah sees that Jezebel will simply kill him, he leaves the northern kingdom, not simply to escape but also to go to Mount Sinai to meet with God. Elijah is not depressed as modern psychologists reading the story paint him. Instead, he is on a mission to Sinai. God even sends an angel to cook him a meal so that he has the energy for the journey.

When Elijah arrives at Sinai, he shelters in the cave there. Presumably the same one from which God had revealed himself to Moses, hundreds of years earlier. As God approaches there is wind, fire, and an earthquake but it is only in a thin silence that God speaks. The meaning is that the powerful God’s coming is accompanied by powerful forces in creation, but God’s actual presence in his word i.e., in what he says that he will do.

At Sinai, Elijah prosecutes Israel for their breaking of the Mosaic covenant in the very place it was established. This is the purpose for which he has with God’s enabling traveled to Sinai. His prosecution is successful, evidenced by God giving a threefold message of judgment against Israel.

In this sense Elijah is typical of the prophets who wrote books of the Bible – they prosecute Israel for their sin and warn of judgment if they do not repent.

But amid these words, God tells Elijah that he has 7000 ordinary Israelite people who remain faithful. It is not that Elijah in his depression says that he is the only prophet left to which God responds by telling him that he is wrong. Elijah is the only prophet left! Israel having killed the others. This and the tearing down of the LORD’s altars was part of the prosecution case to which God rendered a verdict of judgment. What is new here is that not only will God judge Israel for their sins, but he will also redeem a remnant of Israel as a future hope through which he will faithfully fulfil his promises despite Israel’s sin.

This talk of a remnant will lead us to Elisha.

God has spoken by prophets and people are expected to listen to those who speak his word.

Sometimes the false worldviews just need to be called out for what they are e.g., your god is on the toilet.

Sometimes God calls us to repent with a stick (killing the false prophets) and a carrot (the grace of rain).

To be prosecuted for one’s sin and given a guilty verdict of judgment ought to be avoided.

Despite sin running rampant, God will redeem a remnant who will belong to him.