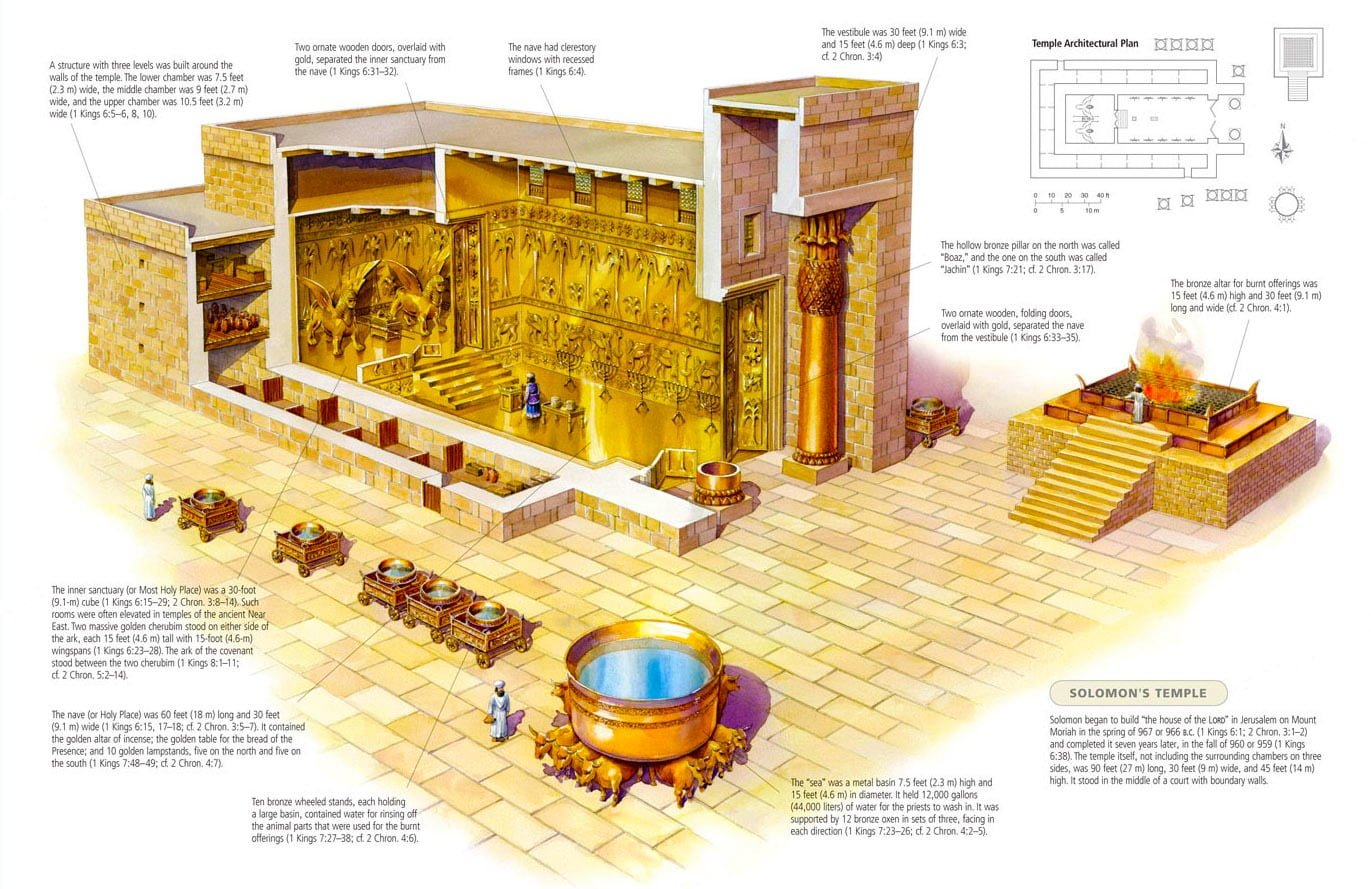 God’s promises to David of a son (people) who would rule an everlasting kingdom (land) and build a temple (blessing) are realized in David’s son, Solomon.

In 1 Kings 4:20-20 Judah and Israel are as many as the sand by the sea. They ate and drank and were happy. Solomon ruled over all the kingdoms from the Euphrates to the land of the Philistines and to the border of Egypt. They brought tribute and served Solomon all the days of his life. This is the golden age of Israel in the Old Testament. All God’s promises to Abraham and David are fulfilled in one sense – but not in the terms of the final consummation where Eden is restored. “They ate and drank and were happy” – a great picture of God’s people living in God’s presence and enjoying his blessing.

Furthermore, Solomon builds a temple (a palace) for God in Jerusalem. God responds by promising to dwell among the people of Israel and to always hear their prayers. The temple is made with beautiful stones, cedar wood and gold. Engraved into the walls and embroidered into the curtains are cherubim and fruit trees recalling the Garden of Eden. (The temple also contains precious stones and a stream that flows from the temple area).

Not only this but when God offers to give Solomon whatever he asks, Solomon says, “Give your servant a hearing heart [an understanding mind] to govern your people, that I may discern between good and evil, for who is able to govern this your great people?” In other words, Solomon asks for wisdom. Whereas Adam as king in Eden sought wisdom through alternate means, Solomon as king in Jerusalem seeks wisdom from God. Solomon is almost a new Adam but making a very different choice. The evidence of Solomon’s wisdom is found in the book of Proverbs.

Finally in 1 Kings 10:23-24 we are told that King Solomon excelled all the kings of the earth in riches and in wisdom. And the whole earth sought the presence of Solomon to hear his wisdom, which God had put into his mind. The Queen of the southernmost land of Sheba was one of these. Here we see the fulfillment of God’s promise to Abraham that through his family all nations on earth would be blessed.

In many ways Solomon is the shadow fulfillment of God’s promises but the fact that he is a shadow fulfillment necessarily means that there will be one greater than Solomon. Jesus, in his humanity, will be the ultimate Son of David who is ‘adopted’ by God as his son to rule on God’s behalf. Jesus will be the anointed king who will rule the everlasting kingdom of God. Jesus will raise up a temple of living people in whom God will dwell. Jesus will bring in a time in which God’s people will eat, drink and be happy. But for now, Solomon shadows these things. For Israel, Solomon’s reign was the best of days – and the people knew that God had been faithful to his promises. A response to this can be read in Psalm 72.