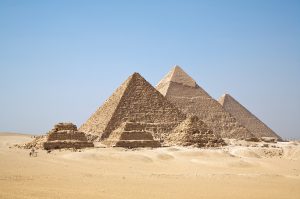 The Exodus story begins with Joseph having been forgotten by the Egyptians but not by God. In 1:7 we are told the people of Israel were fruitful and increased greatly; they multiplied and grew exceedingly strong, so that the land was filled with them. The language echoes the original mandate given to Adam implying that through Israel God will restore Eden.

However, God acts through providence to save Moses’ life. Through providence God has his future deliverer of Israel raised by a princess of Egypt, the daughter of Pharaoh who seeks his death. Ultimately Moses is called by God at the burning bush to lead Israel out of Egypt.

While usually referred to as the ten plagues, the text refers predominately to ten divine blows or strikes against the land, waters, and sky of Egypt.

In the first set of three the judgments Egypt’s magicians mimic God’s power until the third in which they confess, “This is the finger of Yahweh,” and withdraw from the contest.

In the second set of three a separation is made between the Egyptians and the Israelites – the land of Goshen where Israel lives in exempt from God’s judgment against Egypt.

The third series has an emphasis on things that usually suggest God’s presence (hail, lightning, fire and wind) and strikes against the heavens (the sun, moon and stars).

In the Egyptian world view, Pharaoh was a divine person who was responsible for maintaining the natural balances in the land ensuring life and prosperity. As God strikes the land, waters, and sky of Egypt the natural balances are thrown out and crops fail. Clearly, God exposes Pharaoh’s impotence – and Israel learns to reject Egypt’s world view.

The effect of the plagues is a return to chaos and a failure of man’s dominion over creation. As with the Flood-judgment there is a sense of an undoing of creation. Consider how vegetation and animals are removed from the land (locusts, hail and lightning) and how the light of the sun, moon and stars is darkened – creation In Egypt is being undone. This is the nature of sin and judgment.

Finally, the tenth strike is against the procreation of man himself in the death of Egypt’s firstborn – another example of Genesis 1 being undone. Israel, the seed of the woman, is spared this chaos and death through the substitution of a Passover lamb. As Isaac (Israel) had been given over to God and yet had not died through a substitute lamb so too in the Exodus Israel are consecrated to God and yet their lives spared through their substitute Passover lambs.

This part of the story highlights God’s power and authority over creation, the terrible destructive consequences of sin and the judgment of un-creation, the continued faithfulness of God to fulfilling his promises to restore Eden.