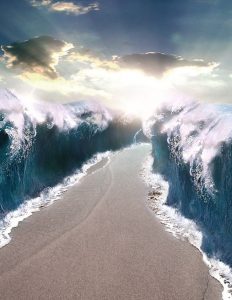 Having been redeemed and ransomed from Egypt, Israel is trapped between the Sea, the mountains and the Pharaoh’s advancing chariots. The LORD promises that he will divide the Sea so that Israel may pass through on dry land.

The first is that the angel of God (I think this refers to Jesus) moves from in front of Israel to behind them. The cloud-pillar separates Egypt from Israel giving light to Israel and darkness to Egypt.

The second divine action is that the Lord divided the waters, drove the sea back by a strong east wind all night and made the sea dry land.

The language of separation of Israel from Egypt, light from darkness, and the separation of waters to create dry land all echoes God’s creation in Genesis 1. This is intentional and from this we should understand that God is doing an act of new creation – in terms of creating a new people.

As the Egyptians had drowned the Israelite boys in the Nile, so now, God acts with justice by drowning the Egyptian men in the Red Sea. Like the Flood, there is a judgment by water upon the Egyptians resulting in a watery grave.

The divine strikes against Egypt’s land, waters, sky and people and this event at the Red Sea has connotations of Egypt being un-created in divine judgment – the animals are gone, plants destroyed, people are killed, and a being swallowed alive in the waters of chaos. On the other hand, Israel emerges on dry land – a new creation – saved and ready for a new beginning where life in Egypt has effectively been buried.

Sin and disobedience lead to a divine un-creation. Think how sin results in death or how adultery may break down the God-made union of marriage.

God is powerful. The wind and the waves are his to command. The forces of chaos are used by God to further his saving plans for his people.

God’s work in his people – including us believers – is to be understood as the commencement of a work on new creation.