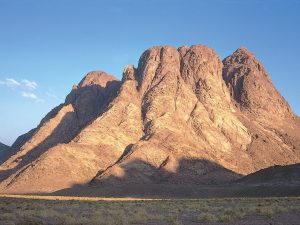 Israel is brought by God to Mount Sinai where God had called Moses in the burning bush. The LORD speaks of having borne Israel on eagle wings and having taken them to himself. Israel camps at the base of the mountain and then are called out to meet with God.

The text speaks of God’s coming in several ways:

A storm theophany – thunders and lightnings and a thick cloud. This indicates God’s power.

Smoke and fire – the entire mount is wrapped in smoke that rises like that of a kiln and God descends in fire. This recalls God’s presence when he made a covenant with Abraham where a smoking fire pot and a flaming torch represented God’s presence. The promise of a people made by God present then is now being realized by God present at Sinai.

The sound of a trumpet becoming increasingly louder – representing God’s voice. Moses will speak and God will answer him in a thunder. All Israel will hear God speak audibly in this way.

Israel’s initial response to the storm theophany is to tremble and shake but when God descends on to Sinai the mount itself (creation) trembles and shakes. God’s appearing is something like a thunderstorm, a volcano, and an earthquake.

Why is God doing this?

Putting several Old Testament texts together, it appears that when God divided the nations at Babel, he assigned oversight of the nations to angels called ‘sons of God’ (e.g., Deut. 32:8-9) who ultimately led them into idolatry and wickedness (e.g., Psalm 82). However, the LORD chose Israel to be his own treasured possession (Exod. 19:5; Deut. 32:9). The purpose of God’s having separated Israel from the nations and gathered them to himself is so that they might hear his voice and know his presence among them. This is what will cause Israel to become God’s own people. Like Adam and Eve, they hear him speak and experience his presence.

But God’s purpose extends beyond this. God has promised that through Abraham all nations would be blessed. Israel is made God’s own so that they will be a holy nation and a kingdom of priests (Exod. 19:6). With God as their king and devoted to him, Israel will be a nation of priests through whom God will mediate his presence to the nations. Israel being made God’s people is simply the first step to redeeming all nations.

Our God is an awesome God. A God of thunder, lightning, smoke and fire before whom both people and creation alike tremble.

As God separated Israel from Egypt, gathered them to himself and caused them to hear and know his presence so too God separates his church from the nations, gathers them to himself and causes us to hear and know his presence. Every Sunday will act this out in our behavior. It is not simply that Israel and the Church are similar, they are related because the Church is an expansion of Israel. The Church of many nations is the goal for which Israel is called out.

Notice how the Apostle Peter (1 Peter 2:9), referring to the Church, says “But you are a chosen race, a royal priesthood, a holy nation, a people for his own possession, that you may proclaim the excellencies of him who called you out of darkness into his marvelous light.” Peter takes God’s words spoken in Exodus 19 of Israel and applies them to the Church. Why? Because God did use Israel to mediate his word and presence to the nations causing the nations to be added into Israel – but we are not up to that part of the story yet.