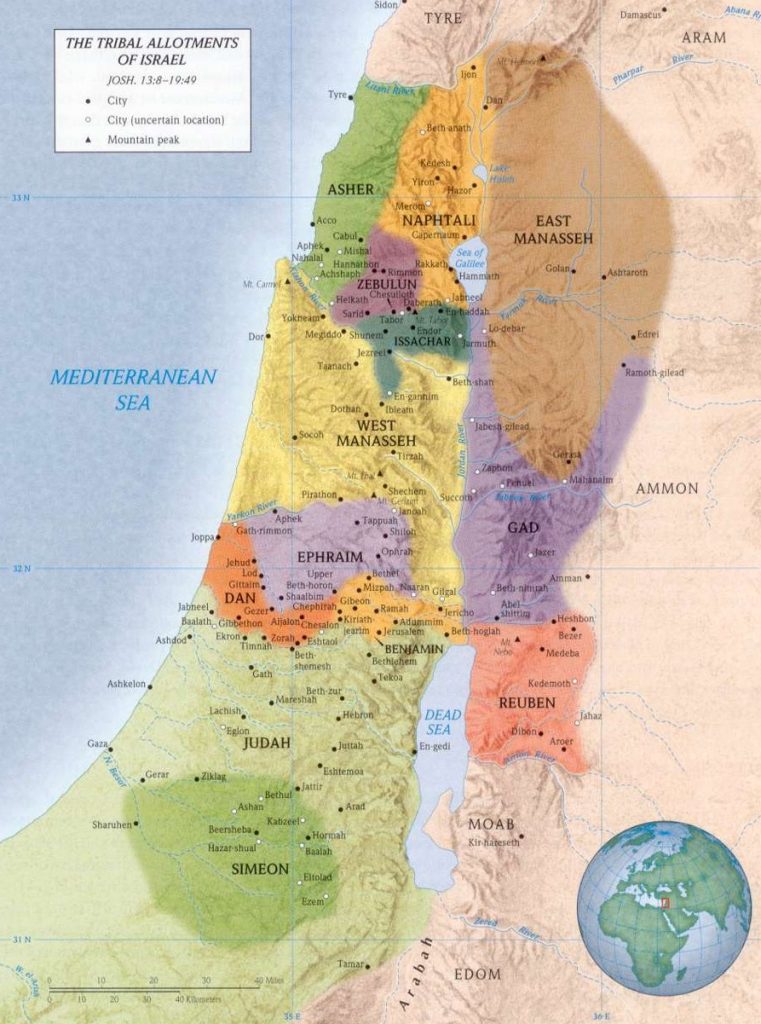 Joshua 13-24 is mostly a list of which parts of the promised land are given to which tribes. The description of the land includes lakes, rivers, hills, gorges, plateaus, valleys, seas, wadis, stones, mountain passes, springs, deserts, ravines, plains, and forests. Each stone and tree points to God’s faithfulness in giving the land promised to Abraham to Abraham’s descendants. Town after town is named and allocated to some tribe or clan. Each town listed and named one by one is an expression of God’s blessing. It is good for God’s people to make sure lists of his grace toward them, not generalizing God’s blessings but naming them, so that we might learn thankfulness and praise.

Another interesting feature of these chapters is that land is allocated by casting lots. Already in Joshua 1-12 we learned that God was the one who conquered the land to give it to his people. The casting of lots is not random but God determines how the lots fall. This means that each tribe, clan, and family inherit their share of the land as directly determined for them by God through the instrumentality of the lot i.e., our family own this part of the land because God gave Canaan to Israel and this patch to our family. The use of lots in distributing Israel’s inheritance should serve to remind Christians that our future inheritance likewise is assigned to us by God. One may also speak of one’s lot in life as coming from the hand of God. If we adopt this thinking, we will be less inclined to grumble.

In the last chapter of the book, Joshua gives his final speech. He reminds Israel of their history from the moment when God made promises to Abraham, their exodus from Egypt and their inheriting the land. He reminds them that they did not gain the land by their own swords and bows (24:10). And that the LORD gave them a land on which they had not labored and cities that they had not built, and they dwell in them. They eat the fruit of vineyards and olive orchards that they did not plant (24:13) – in other words they live and enjoy life by grace.

The people confess this to be true and when challenged by Joshua to serve whether the LORD or idols, they choose the LORD – “as for me and my house we shall serve the LORD.”

The book of Joshua, like those of Genesis and Deuteronomy, ends with funerals. Joshua and Eleazar, among the few who had lived in Egypt as young people, die and are buried in their hometowns in Canaan. God has been faithful that they should die in the promised land. Also, the bones of Joseph that had been placed in a coffin in Egypt and remained there during the years of slavery, then been carried through the wilderness are buried at Shechem (the land where his father Jacob had dwelled and where Joseph had spent his youth). Three funerals that testify to God’s goodness and faithfulness.