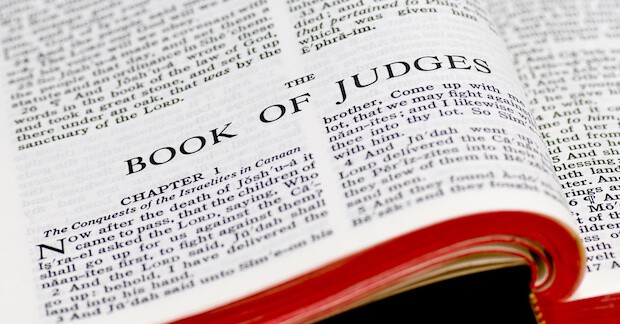 They were the worst of days, but they should have been the best of days. By the end of the book of Joshua God’s people (Israel) are living in the land (Canaan) with the blessings of God dwelling in their midst – the new Adam in the new Eden.

However, following the death of Joshua and the conquest generation, those born in the land turn to sin intermarrying with the remaining Canaanites and turning to their idols. Israel’s sin is described as their “doing what was right in their own eyes” which equates with “what was evil in the eyes of the LORD.” Doing what is right in one’s own eyes is like eating from the tree of the knowledge of good and evil, in other words, a seeking after wisdom that is independent of God. There is a sense that in Canaan, the new Adam (Israel) has a similar Fall story.

God’s response is to sell Israel into the hands of their enemies. Being sold is the language of slavery. Israel’s sin results in a judgment that returns them to their pre-Exodus condition – slavery as they were in Egypt. Once again sin has the outcome of a kind of uncreation (c.f. the Flood story).

The cycle in Judges is that Israel sin, God hands them over to oppressors, they cry out to God (as they had in Egypt), God sends them a deliverer (as he had with Moses), and they experience a time of peace before returning to their sin.

An example of the above is when Israel sins and are sold into the hands of the Canaanites with their 900 iron chariots. God raises up a deliverer through Deborah and Barak. During the battle God causes a thunderstorm causing the Kishon river to flood so that the 900 iron chariots are abandoned in the mud and the chariot commander Sisera flees on foot. The story is told in language that recalls Pharaoh’s chariots at the Red Sea – and like that story a song of praise ends the account. Sisera had thought to destroy Israel with his many iron chariots is himself destroyed with one iron nail by Jael. Barak’s victory is through God’s work in Deborah and Jael whose names mean ‘Mountain Goat’ and ‘Bee’ perhaps alluding to the land of milk and honey which now experiences peace.

However, the overall story of the book of Judges demonstrates the progressive decline in the Judges from good Othniel through to very ordinary Samson. In fact, the book ends with two stories of moral failure in Israel. One of the stories relates to the establishment of a national idolatry shrine and the other to sexual immorality that is told in a way that recalls Sodom and Gomorrah.

Judges ends with Israel more like Sodom than the people of God – it is a depressing and somewhat hopeless narrative in the story to return to Eden. But amid their and our sin, God is faithful and gracious. He continues to hear the cries of his people, send deliverers, and give peace. The new hope for Israel will be in the next book of the Bible.