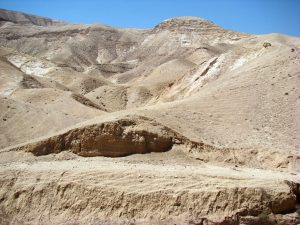 The gospels indicate that Jesus, born of the fields of Bethlehem, is God-in-the-flesh come to dwell among the people of Israel – God is incarnational as when God’s dwelt in a goat skin tent in the wilderness.

Matthew begins his gospel with a genealogy that has Jesus as being both the son of David and the son of Abraham. When Herod seeks to kill Jesus as a small child it recalls Pharaoh’s massacre of the Israelite boys. Having fled Herod, Jesus is subsequently brought out of Egypt. At the Jordan River he is baptized. In the wilderness he is tested. Matthew portrays Jesus as recapitulating Israel’s story. As Israel was tested in the wilderness so Jesus is tested in the wilderness – but unlike Israel, Jesus is shown to be sinless. Matthew portrays Jesus as the true Israel remnant reduced-to-one person.

In Matthew 11, John the baptizer asks Jesus for confirmation that he is indeed the one who brings in the kingdom of heaven. Jesus replies by quoting Isaiah:  Then the eyes of the blind shall be opened, and the ears of the deaf unstopped; then shall the lame man leap like a deer, and the tongue of the mute sing for joy. Isaiah had spoken of these deeds of power as accompanying the Second Exodus restoration that God would bring about. Jesus refers to the poor having the good news preached to them. In its original context the poor were those in exile and the good news was to do with their release from exile. In other words, Jesus identifies what he is doing with the Second Exodus restoration.

We saw in the Old Testament that Elijah-Elisha formed a pair typical of how the prophets spoke. First, prosecution for Israel’s sin, second announcing God’s verdict (as Elijah and John had done) and then finally speaking of a future restoration exemplified in Elisha’s miracles of multiplying the loaves, raising the dead sons of widows, cleansing lepers.  The miracles of Jesus all point to him being the one who will bring about the restoration of Eden.