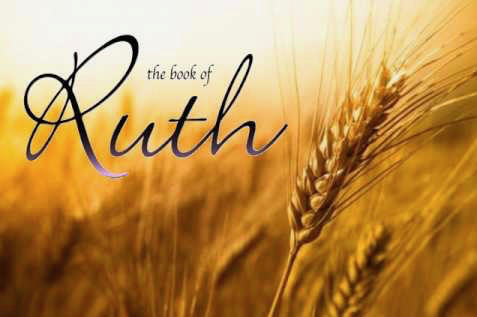 The book of Ruth begins with the words: In the days when the judges ruled there was a famine. Those were the worst of days when everyone did what was good in their own eyes. Judges ended with Israel sounding very much like Sodom. It is in this context that we have the very small book of Ruth.

We are introduced to a man Elimelech (God is king) and his wife Naomi (pleasant) who live in Bethlehem (House of bread). But in Israel God has been rejected as king and the pleasant land is under the covenant curse of famine – there is no bread. The appropriate response should have been to seek after the LORD in repentance, but Elimelech’s solution is to abandon the Promised Land for Moab. While this seems good in his eyes it results in his sons marrying Moabite women in disobedience to the law of Moses. Both sons die of plague (another covenant curse) before Elimelech himself dies and is buried outside the land of God’s promise.

Naomi returns home upon hearing that God had visited his people bringing them blessing and grain. She is accompanied by Ruth her Moabite daughter-in-law. Note Ruth’s words: “For where you go I will go, and where you lodge I will lodge. Your people shall be my people, and your God my God. Where you die I will die, and there will I be buried.” (note: Ruth the believing Moabite will be buried in God’s land whereas the Israelite unbelieving men in this family will die estranged from the land of God’s presence.)

Eventually, Ruth meets Boaz who is a kinsman-redeemer. In the Old Testament a kinsman-redeemer is a family member who helps you when you have fallen into difficulty especially if you have become indebted or enslaved. Boaz spreads the corner of his garment over Ruth as a sign of taking her as his wife who he will clothe and protect.

Naomi’s life is changed from barren bitterness to fruitful joy when Ruth gives birth to her grandson, Obed. Obed becomes to Naomi a restorer of life and a nourisher of in her old age.

On one hand the book of Ruth seems to simply be the story of a single family in Israel during a time when Israel is spiritually impoverished. The heroine of the book is Ruth who puts her trust in the God of Israel. However, a larger perspective is needed. These are the days of the judges when does what is good in their eyes. These are the days of covenant curses such as famine and plague. These are the days when Israel is no better than Sodom. All seems lost in the Revenge of the Sith-like serpent. The book of Ruth provides a New Hope. The new hope in Ruth does not come in the form of prophets and miracles nor of judges and mighty warriors nor even in God speaking his word – no, the new hope is a baby born to a Moabite woman and a man of Bethlehem.

The family tree in the final verses runs from Obed to Jesse to David. David will be the chosen one whom God raises up – the continuation of the seed of the woman. Through David God will redeem his people from the worst of days and through David will come the messianic line.

Who would have thought that, away from the main events at the time, a baby born in the fields of Bethlehem would be the chosen one through whom God would act?